My dad’s coming to the Bay Area in a few short weeks. Thanks to the coronavirus pandemic, many of our usual father-son activities are off the table. For instance, in-restaurant dining is out of the question (even if it was allowed, we almost certainly wouldn’t do it, for understandable reasons), and while horse races will be run at the Alameda County Fair in nearby Pleasanton, fans will not be allowed on the grounds.

One thing we can do, however, is play golf. My dad is a lifelong player, a multiple-time club champion at various courses in upstate New York, and a single-digit handicap who often finds ways to grumble about scores in the high-70’s. I know this because he usually calls me on his way home after posting said scores.

In my case, though, “play golf” is a relative term. Perhaps the more appropriate description of my activity would be “attempt to not awaken the ghost of Old Tom Morris by partaking in the biggest earth-moving project in the history of Contra Costa County.” My all-time best round was a 96 at Rancho Park in Los Angeles, the former site of the LA Open before it moved to Riviera. I finished par-par-par, including a 5 on a finishing hole that once induced a 12 from Arnold Palmer, and I felt like turning my driver into a bull, a la Adam Sandler in “Happy Gilmore.”

I’ve never been a consistently active golfer, even after moving to California, where the golf season doubles in length from where I grew up. I enjoy the game, but between working on weekends for most of my career and having a lot of other stuff going on, I’ve never had the time to devote to being good at it. Add in that they don’t really make golf clubs for people who stand 6’5” and that most golfing activities involve bending something that usually doesn’t bend much for people my height, and you wind up with an awkward marriage of hobbyist and hobby.

This may seem verbose, but you need to have a clear picture of all of it, as everything you’ve just read leads to a two-part declaration.

Part one: My father and I will be playing Pebble Beach.

Part two: I am mortified.

This is the most renowned public golf course in the country. It’s hosted six U.S. Opens. Nicklaus hit one of the best shots of his career with a 1-iron here. Watson holed the ultimate “you could put a bucket of balls out there and never do that again” chip here. Tiger could’ve won the 2000 U.S. Open here playing on his knees.

And they’re letting ME play there?

I sweat over the pick box in Saratoga’s Pink Sheet every day of every meet. I hurl my phone into the couch when horses I bet lose photo finishes (my phone and couch can attest this happens often). I rage-quit video games, and I full-heartedly fling myself into things where nothing more than bragging rights are on the line (if you’re in Group Four in the contest being put on by the fine folks at The Daily Gallop, you know this already). Put that together with a tee shot that naturally veers further to the right than Mitch McConnell, and you have a recipe for disaster.

I need help, and lots of it, so I’m trying to work my way into something resembling decent form ahead of my father’s visit. Step one came Sunday with a trip to Diablo Hills, a nine-hole, par-34 course a few miles from my apartment. I got thrown into a foursome with three nice, outgoing people who were kind enough to laugh at my usual pre-round proclamation, “I suck, but I suck quickly.”

Early returns were not promising. After teeing up the first of three Titleist golf balls marked, “I’M NOT LOST, I’M HIDING FROM ANDREW CHAMPAGNE,” I took a deep breath through my mask, pulled, my driver back, and gave it a big move through the ball. True to form, the drive looked great for about 75 yards before making a hard right turn and ignoring my pained cries of, “hold, ball!” When the ball stopped 200 yards from the tee, it did so thanks to a conveniently-placed fence that trapped it in its wiring. 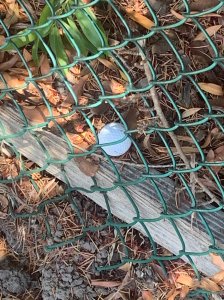 After thanking the fence profusely for its service and giving myself a drop that was questionable in legality (basically, I treated the fence as though it was a hazard and used the foolproof, “I’m not walking all the way back there to hit another tee shot,” defense), I pulled out a wedge, and all of a sudden, things got weird, as my body was momentarily possessed by a golfing spirit that knew what it was doing. My uphill shot dodged a nearby tree, floated through the air, and came to rest on the front part of the green about 40 feet from the cup. I salvaged a two-putt bogey, and with that, we were off and running.

Diablo Hills is built around several apartment complexes, several of which must feel like war zones in the summer with golf balls bombarding roofs, walls, windows, and parked cars from dawn to dusk. The fourth hole is a 90-yard par 3 down a hill near a major road in town. My playing partners confirmed moving cars had been hit by errant tee shots in the past, so I had plenty of apprehension as I stood over my ball (especially since said ball had my full name on it and could be used against me in traffic court).

I gave it my best three-quarter wedge swing, and it looked good off the clubhead.

“Be right,” I pleaded as it approached the green and a bunker guarding it.

It was, but barely. It missed the side of the bunker by about three feet, bounced once, and skidded to a stop about 10 feet past the hole.

Fear not, though, as I remembered my lack of skill on the green and squirted the birdie putt a foot or two past the cup on the right side. Crap.

Still, I wound up playing like I actually had some sort of clue, which shocked me. Despite a three-putt double-bogey on the course’s lone par-5 (a devilish, 500-yard uphill hole that points and laughs at walkers too brave/cheap to rent a cart), I signed for a respectable 44, and it could’ve been two or three shots lower with better putting and/or drives kept on the planet. 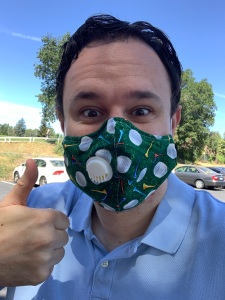 I felt strangely optimistic as I took my golfer’s mask off in the car. Diablo Hills is no Pebble Beach, but if I can straighten out the big stick and start making some putts, perhaps I won’t totally embarrass myself on a big stage.

Then again, if I do, it’ll make for a pretty funny column.