In something that undoubtedly does not sit well with some members of racing’s establishment, I have a ballot for the National Museum of Racing and Hall of Fame. It’s one of the great honors of my career, and it’s always a joy to analyze the finalists, fill out my ballot, and mail it back east.

Last year was the first voting cycle with a new election threshold of 50 percent, plus one vote. The 2018 class was also one of the smallest in recent memory, as voters elected just one thoroughbred (Heavenly Prize). Whether this was a one-off occurrence or an indication of a shift in voter behavior is something we’ll likely find out when the 2019 class is announced in late-April.

One year ago, I had three horses on my ballot (for an explanation on last year’s ballot, click here). Heavenly Prize was one. The other two were Blind Luck and Havre de Grace, who both show up again. Once again, they make my ballot. The former won 10 graded stakes races (six of the Grade 1 variety), while the latter won Horse of the Year honors in 2011, a season where she beat the boys in the Grade 1 Woodward at Saratoga.

Two horses showed up on the ballot for the first time. Like many others, I’m sure, I voted for Royal Delta, a two-time winner of the Breeders’ Cup Ladies Classic. By any measure, she’s one of the best female racehorses of the 21st century, and while her credentials may mean she doesn’t crack the top pantheon of Hall of Fame horses, she did more than enough to earn a plaque in Saratoga Springs. It’s a safe bet that she’ll be a first-ballot Hall of Famer.

That’s the extent of my ballot, and I’ll go down the list of horses, trainers, and jockeys. If you’re a longtime reader of the site, you probably know I’m no huge fan of Gio Ponti. At some point, to be a Hall of Fame horse, you have to beat really good horses, and in my estimation, he never did that. Meanwhile, Rags to Riches showed up on this year’s ballot, and she may be a sentimental choice for some voters. However, one tremendous moment does not a Hall of Fame career make. Yes, her win in the Belmont against males was memorable, but she raced just once after that and never beat older rivals. That’s not enough for me.

As far as the humans are concerned, I have tremendous respect for the careers of Mark Casse, Christophe Clement, Craig Perret, and David Whiteley. If any of them are enshrined this summer, I won’t be raising a stink about it. Having said that, none of them particularly hit me as people who need to be in.

Of the group, Casse and Clement are closest to earning my vote, and with both horsemen still active with large barns, my opinions may be swayed in the coming years. I don’t think Casse’s done quite enough in the U.S. as opposed to Canada (remember, it’s the NATIONAL Museum of Racing and Hall of Fame), and Clement’s lack of a Breeders’ Cup win is a big strike against him. Those aren’t easy races to win, as Clement trainee Gio Ponti’s seconds to Zenyatta and Goldikova prove, but when we get to this point, the goose egg matters.

One or two more big horses likely puts Casse in. A win on racing’s biggest stage probably puts Clement in. However, at this time, I couldn’t bring myself to check the box next to either name. I respect that others may feel differently, and if I’m outnumbered, I’ll tip my cap and eagerly tune in to the induction ceremony to hear their speeches.

Saturday’s card at Oaklawn Park is a really good one. An 11-race program is on tap, and it features two divisions of the Grade 2 Rebel. The card has drawn not just Bob Baffert trainees Game Winner and Improbable, but several of the best older fillies and mares in the country as well.

There are two Pick Four sequences on tap, and I think both are pretty attractive. Let’s get to it!

Like many others, I’m sure, I’ve singled a heavy favorite in the payoff leg. However, the first three races all hit me as wide-open affairs, and given field sizes, we may be able to extract value from the sequence.

We kick things off with a maiden special weight event, and I’ve used the two inside runners. #1 BREAKING NEWS ran very well in his debut before regressing a bit last time out, but the recent work indicates he’s coming back to form. Additionally, #2 MY LEGACY showed a lot of speed in his unveiling at Fair Grounds before fading to fourth, and should improve for Hall of Fame trainer Steve Asmussen.

The second race is one of a few races every season at Oaklawn that baffle me. It’s a 12-furlong starter allowance event, and, for obvious reasons, I felt the need to spread. If you’re looking for a bit of a price, #4 BIGSHOT LACEWELL showed speed in a similar event earlier in the meet, and this race seems very light on early zip. If he gets comfortable, he could make the 8-1 morning line price look like a real overlay.

Maidens will go two turns in the third race, and I also felt the need to spread a bit here. #3 PLUG AND PLAY almost certainly needed his debut, and he’s not bred to be a sprinter. He adds blinkers and stretches out to a two-turn route of ground he should love, and for that reason, he’s my top pick. However, if you’re going price-shopping, #6 KINETIC SWAGGER showed zip off the bench last time out in a race that doubled as his first outing since October. A logical step forward in his second start back puts him right there, and given the 15-1 morning line price, I need to have him on the ticket.

It could be a big day for trainer Bob Baffert, and it starts in the fourth race with #5 DESSMAN. He was last seen suffering a brutal beat in the Grade 2 San Vicente, when he was beaten a nose while earning a 94 Beyer Speed Figure. He does try two turns for the first time, but given that he’s a son of Belmont winner Union Rags, I don’t think that will be an issue. Anything close to either of his previous efforts likely puts him far clear of the rest of the field, and because of that, he’ll likely be a very short price (the 8/5 morning line actually seems a tad generous).

I’m going to do something a bit different. I think DRF Ticket Maker’s functions fit this all-stakes Pick Four sequence like a glove, so I used it to put together $14.50 worth of tickets. 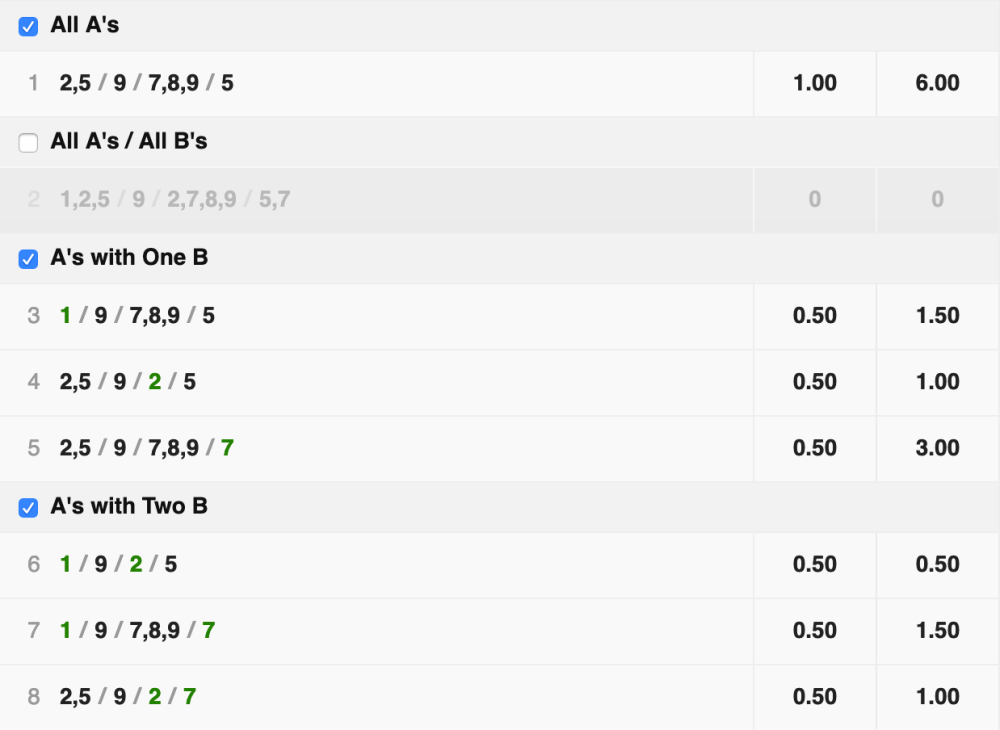 The sequence kicks off with the Grade 2 Azeri for older fillies and mares. The field is short on quantity, but long on quality, as it drew both #2 MIDNIGHT BISOU and #5 ELATE (among others). Unsurprisingly, I’m using them both, but I’m also going to lightly use a big price. For all of the talent in this race, there isn’t much early speed. Midnight Bisou is tactical, which will help, but I needed some coverage in case #1 TAPA TAPA TAPA is left alone on the lead. She’s certainly not as talented as the four Grade 1 winners in here, but if you subscribe to the notion that pace makes the race, she can’t be completely ignored.

The eighth race is the first division of the Rebel, and while I wish I could get cute, I don’t think #9 IMPROBABLE loses. To me, this is the weaker division of the race, and anything close to his last two races puts him in the winner’s circle. I am not a believer in #8 GALILEAN, who has beaten nothing in Cal-bred races and tries open company for the first time. If you’re looking for a price underneath, #2 LONG RANGE TODDY had a deceptively awful trip in the Grade 3 Southwest, where he was shuffled back along the rail multiple times yet still salvaged third money. I don’t think the rider change is a coincidence, and while I doubt he’s talented enough to challenge Improbable, I think he’s talented enough to merit inclusion on the bottom of exacta tickets.

The ninth race is the Essex Handicap. I’m using likely favorite #8 GIANT EXPECTATIONS, but I don’t think he’s anything close to a cinch. He’s not a great gate horse, which is problematic given that he likes to be on or near the lead, and even if he gets out well, he almost certainly won’t be alone going into the first turn. My top pick is #7 SNAPPER SINCLAIR, a hard-knocking sort with tactical speed that may be getting better as a 4-year-old. Additionally, I don’t think there’s ANY chance #9 RATED R SUPERSTAR is close to his 12-1 morning line price, given his solid third in the Grade 3 Razorback last month. He should get a favorable race flow, and I think he’ll be flying late. Finally, I’ll lightly use fellow closer #2 HENCE, who may need to step forward but has been working well and would also benefit from fast fractions.

The payoff leg is the second division of the Rebel, and it features Breeders’ Cup Juvenile hero #5 GAME WINNER, who makes his seasonal debut. I think he’ll be very tough, but I could at least see a scenario where a rival nips him. I really liked #7 OUR BRAINTRUST in the Grade 3 Withers, and he looked like a winner turning for home. However, he was soundly bumped multiple times by that day’s runner-up (I thought it was enough to merit a DQ, actually), and he hung as a result. He gets blinkers here for his second start around two turns, and I love that he’s taken steps forward with every race he’s run. Would another step forward be enough to beat Game Winner if that one is fully-cranked? Probably not. However, it’s not like that one has been working lights-out of late. If Game Winner needs a race, I’ll at least have a little bit of coverage with another runner in the field.